The first Commonwealth Study Conference was convened in Oxford in 1956. It initiated a new process of dialogue and personal development among people who are likely to have increasing leadership responsibilities in business, government, trade unions and the community sector.

The founder, His Royal Highness The Duke of Edinburgh – my father – has written that the structure of the conferences has remained constant since then because it has been shown to work. Participants from around the Commonwealth come with a wide variety of relatively narrow experiences. The principle of learning by observing and discussion was established from the very start and every opportunity is provided for opinions and assessments to be debated forcefully, but objectively.

Each Conference exposes the participants to new experiences, new arguments and diverse perspectives, so that the quality and relevance of their decision-making is improved through a broadening of their exposure to different approaches.

The CSC participants also learn about their world. The Commonwealth represents the shared heritage of nearly one third of the earth’s population. For its 53 member nations, it is a source of special opportunity and connection. At the study conference, the Commonwealth itself becomes a classroom where each participant will engage with and learn from 300 others.

I am delighted that Canada has chosen to host the 11th Commonwealth Study Conference in 2023. Experience has shown these conferences are a force for good. The time, resources and effort required to re-constitute and sustain the CSC Conferences are a critical contribution to a Connected Commonwealth and a tribute to my father. You can count on my continued support and engagement. 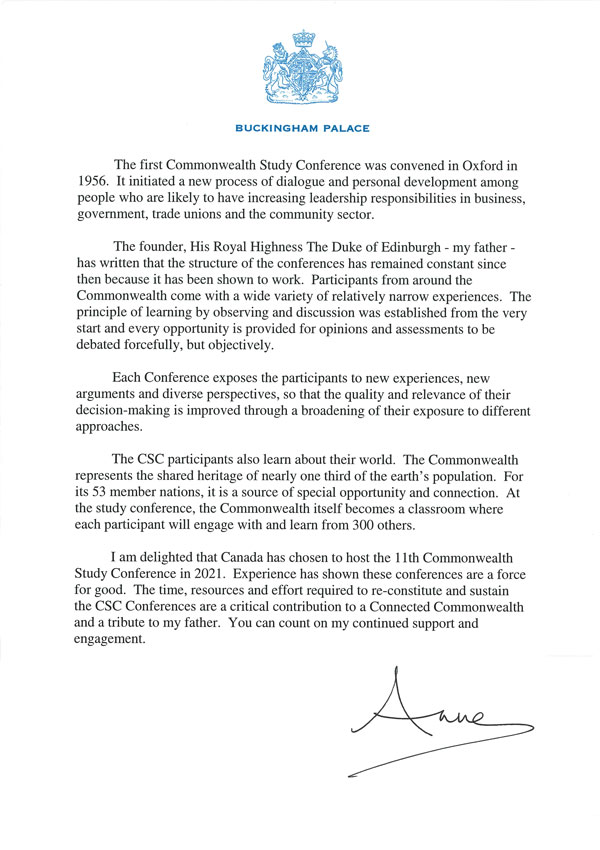